August 01, 2014
To be honest, i think this post smacks of narcissism.
Still, i like to write. So, why not write about something i can completely relate to as opposed to some alien abstract theory i am supposed to be able to relate to?
Sometimes, when people tell me my teeth is white, and they like that, he shakes his head. He tells me that what they really mean is that i am quite dark in complexion, and the contrast between my skin colour and teeth colour creates an illusion of the teeth being whiter than it actually is. “This, my dear is what they mean, they just don’t know it”. Even he says this, i tell him “you are over analyzing again. Just accept the compliment and leave it at that” He nods and doesn't.

Introducing, (a round of applause for this gentleman please) the guy in my head. For purposes of this discussion, let’s call him Parano. Yes, Parano would do. ‘Parano’ is a ‘subset’ of 'paranoia', and the latter fits this context almost perfectly. 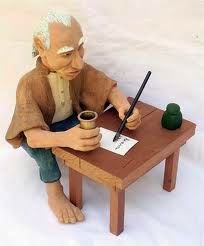 Meet Parano. Apparently, his abode is somewhere in my head or mind as you might like to term it. Parano is a really awesome guy who has very reasonable explanations for everything that happens. He also has jarring deep insight, the kind that wows you. I’m not really sure when i met him, but i can recall one of our early interactions. I was quite young, watching a movie and Pete Edochie, who starred in the movie as the antagonist made a comment. He said “…two cars”. Parano stood up quite suddenly. “What he actually means is ‘ two women’.”
“What? Why do you say that? How can you sound so sure?” I asked perplexed
“Open your eyes Honey.” He chided me “Haven’t you been watching this movie? ‘two cars’ here is a code for ‘two women’. I’m sure”
Parano sounded so certain that i agreed. I even told my movie watching partners that Pete Edochie’s use of the word 'two cars' in that particular scene actually referred to 'two women'. At the end of the movie, Parano was proved wrong. I felt disoriented and promised not to trust him again. ever.
I didn't keep my promise.
To be fair, (since i  like to think of myself as a fair person), i will also give credit to Parano for the good times. The good times, like when a friend exhibits an action that is mind boggling and Parano comes to the rescue.
“Why?” I’d ask him “Why are they doing this?”

“Because, dear Lynda” he’d reply “because they are hungry”
A while later, when my friends and i have settled our differences, i ‘d ask them
“Hey friend, what was that act, that other day all about? I didn’t get it …you see”
“I was hungry” Friend would reply.
Yes. Parano can be that accurate. I will not forget to mention his strange ability to create an entire magnificent/beautiful web with the tiniest bits and pieces. Sometimes he creates such a web, and forces me to go about trying to verify its authenticity. Talk about concluding before the facts; or performing a statistical test by starting with the decision, then, walking backward step by step to the hypothesis!; or proving by contradiction. Super weird i say.

When i try to visualize him, i see a strict looking gnome-like figure, with really large eyes; pen and paper in hand, writing and sketching; ever working to answer all my questions wisely, I see his shelf full of scrolls. Loads and loads of Scrolls that contain all that i have ever seen or heard. I imagine that he always has the same caption on any paper he is actively writing or sketching on. The caption is CONNECT THE DOTS.

Anyways, this is just an intro. As much as he has been with me all through my conscious existence, i cannot for the life of me write credible articles on him. I can only do what i have done. Introduce him sparsely. Hopefully, this touching story of mine would touch someone.
Lol.

Disclaimer: em, due to the gender fever in the atmosphere these days, i feel a need to explain why i have used a male figure as Parano. Well, the reason is simply, because i wanted to. And, because it felt appropriate. So, scratch whatever reservations you had as a result of that. Please? Thanks! You are just adorable!

p.s In other news, Opemipo thinks we should all be geeks. Find out why here .

TRIBUTE TO A MAN WHOSE NAME I DON’T KNOW.

July 21, 2014
He is not tall. In fact i can reasonably say that height is not his strong point. Before that, let’s do a little introduction. In my almost four years as an undergraduate, i have encountered quite a number of types of individuals in different kinds of administrative positions. By administrative, i mean positions of authority that entail attending to students. Before i bore you, let me narrow this to the matter at hand. I've seen irritable, angry, hot-tempered, short-tempered, quick-tempered, rude, angry and irritable people. I am not trying to impress with language here. I've walked into offices as a green undergraduate seeking help and gotten treatments that brought tears to my eyes, meted out to me by fat women behind desks, who ignored their duties and munched egg-roll or boiled groundnuts, and gossiped about their office colleague who had stepped out to pee. I've been walked out of offices because a lecturer didn't like the fact that i did not immediately underst
5 comments
Read more

August 08, 2014
What came over me? No. Seriously, something did come over me. The problem with me is you.Really it is. I didn’t know what i was doing. I’m sorry. I wasn’t thinking. It was the devil! No, God! He gave me an F. We are familiar with that part of us that relegates blame to some seen or unseen third party right? Perfect. I want to do a cute little talk on it. As some of my more assertive friends would say, ‘let us thrash this matter’, or at least, let us try to. There’s almost always no harm in trying out stuff(unless by trying out stuff, you mean trying out poisonous substances, or trying to see if a concentrated acid bath would do what it is said to do- in which case i cannot really assure you that there is no harm in trying- or other downright dangerous escapades) WHO IS TO BLAME?   The first time i actively discussed this particular topic was some months ago during my internship when my fellow intern (name withheld  J ) proposed a theory. Which is not in an
1 comment
Read more